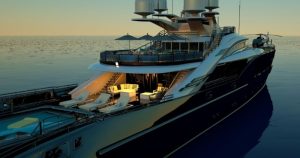 Luxury yacht is really a general term covering a whole range of boats with no real standard as to what is luxury and what is not. If luxury is relative to size, value and building costs then the most luxurious yachts in the world will be the biggest ones owned by some of the richest people in the world. In contrast the owner of a top of the range sixty feet sailing yacht will also consider his boat luxurious if it contains everything that you could possibly build into such a yacht.

Luxury yachts have their roots after the first world war when wealthy individuals realized the advantages and esteem of owning large private yachts. An early example was the Savarona, launched in 1931 and later acquired by the Turkish Government. After the second world war, a famous luxury motor yacht appeared when the Christina O was converted from a Canadian frigate.

Early luxury sailing yachts were those classed as J class and used for competing in the Americas Cup sailing competition. One of the most famous was the Shamrock owned by the tea magnate Sir Thomas Lipton, and only a few were ever constructed. They were owned by wealthy people who lived a luxurious life style on or away from the yacht.

Over the last thirty years there has been a big increase in large luxury yachts which are owned by oil sheiks and wealthy new technology business owners such as Bill Gates. Having said that luxury does not have to be about big, a wealthy stock broker would be just as proud of his eighty foot sailing yacht as Roman Abramovich is of his 557 foot, $450 million mega yacht.

If you are considering a luxury yacht charter then think money, as this is what you will need, and lots of it. These boats are just the same as hotels or cars, you pay what you can afford and you get what you pay for. You can have as much fun chartering a cheaper yacht without the fittings of a luxury one but you will not be pampered as much.

Some luxury yachts are used exclusively by their owners and guests, others are operated all year round as charter businesses by boat owning businesses, also a large number are privately owned but available for charter when the owner is not using it. Charter rates vary tremendously from a an eighty foot boat with two crew to a mega yacht with twenty crew. However one thing is common across all ranges of yachts, the daily charter rate is only the start of your expenses. Extras of approximately 25-30%, such as fuel, drinks, food and berthing fees are additional to the day rate as well as a customary 15-20% crew gratuity for good service.

The luxury yacht charter industry works effectively because private yacht owners and charter yacht owners offset their costs with charter income as well as well as keeping their yachts in good order and well manned from this income. Conversely, yacht charterers charter their boats as and when required as it is less expensive than owning and maintaining a yacht and equally important it gives them the choice to choose different yachts in different parts of the world.

By adminDecember 1, 2022BlogLeave a Comment on Are You Considering a Luxury Yacht Charter?

Lexus Repair Near Me